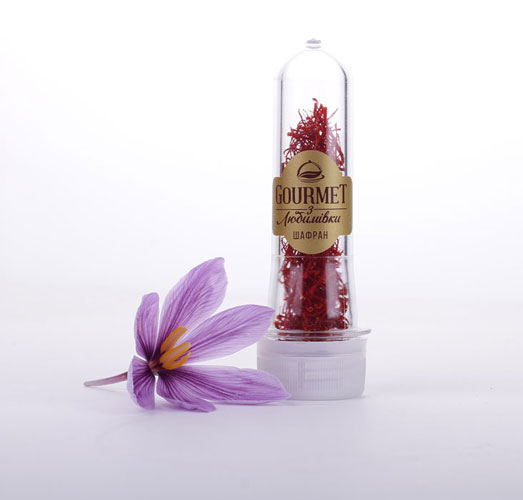 In August 2015 "Agro-Focus" company launched a new project on growing Ukrainian saffron in the village of Lyubymivka that is Kakhovka district Kherson province.

Saffron spice is dried stigmas of Crocus sativus flower. At the start of the project "Agro-Focus" company purchased 2200 kg bulbs of Crocus sativus from Holland company, which is a professional in the selection and cultivation of saffron bulbs. Some of the bulbs were planted in the greenhouses (0.08 ha) while the other part was put down in the open field of 0.1 ha in size.

Purple crocus flowers only couple of weeks in autumn. During this period it is extremely important to gather the flowers and to prepare the pistils for drying. In 2015 the flowering of saffron in Lyubymivka began on 30th of October and lasted almost until 10th of December. Ingathering and pre-treatment of saffron flowers was done exclusively by hand. Flower gathering takes place before sunrise until pistils become dry and fragile under the sunlight. Farmers of “Agro-Focus” managed to gather the first harvest of saffron. After the pistils were dried in a drying cabinet, 1240 g of saffron spice for the first time grown in Ukraine were obtained!

Ukrainian saffron cultivated by "Agro-Focus" in Lyubymivka village can be called 100% organic, as no preparations for protection against pests are applied and only manure is used for bedding. Even the weeds were removed manually!

Saffron spice is used in cooking and in confectionery manufacturing. Saffron brings delightful aroma and piquant taste with a bitter twist to a wide variety of dishes. Rice with saffron, whether it is risotto, pilaf or rice pudding is considered to be a perfect combination. Saffron is used both as a spice and as a dye for the preparation of desserts, ice cream, biscuits and cocktails.

This year "Agro - Focus" company is pleased to provide Ukrainian saffron to the restaurants and pastry shops of Ukraine!